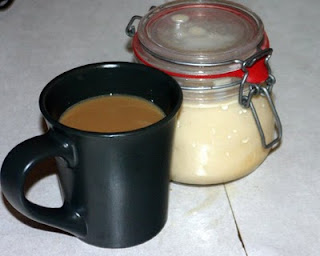 I have to limit my coffee intake since I found it was a huge trigger for my irritability and temper. I usually stick to tea, and only one cup of black tea at the most! But every now and then I have a craving for a cozy, tasty cup of coffee laden with Creme Brulee liquid creamer. It's so good, but not only is it totally full of fat and sugar (and all those 'un-pronouncables'), it's pretty pricey. Up here in Juneau it's around $4 for the large bottle (is it a quart? I don't remember.). I didn't want to go buy a big quantity considering it would tempt me to drink coffee all the time, but every now and then I ponder buying some- partnered with decaf joe just for the comforting taste...

Well yesterday morning was one of those mornings that follow a fairly sleepless night. I was exhausted and had scheduled to move furniture with my Hubby for the better part of the day. I groaned to Brent that I really wanted some coffee.

"Go ahead, I made some," he says.
"But I don't have any creamer," I whine.
"Why don't you see if there's a recipe online and just make some?"
Oh yeah. Novel thought. For a moment I was almost ashamed he had to tell me to try to find a scratch recipe. I must be getting soft. What's even more pitiful is that I was actually at the computer when he said that.

Anyway, I quickly glanced through various recipes and, while there were some variations as to flavorings, they all seemed to consist of 2 basic ingredients:

1 can sweetened condensed milk (YES! I had one on hand!)
1 can full of regular milk

Some recipes added in powdered milk for extra creaminess, but I just stuck with the basics for my first run. In order to make it taste more like the creme brulee version, I added 2 Tbsp Pure Vanilla Extract and 3 Tbsp Brown Sugar. Yeah, like I said before, "sugar and fat". Mmmmm. 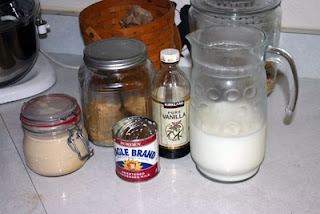 So, I just added the milk into a sealed jar and stirred with a little whisk until smooth. That's it!
Now for the taste test! It was really good! Hooray!! Now, it wasn't quite as sweet as the store-bought, but I could always add more brown sugar if I wanted. I actually liked it a little more mild though, and subsequently since yesterday morning have also successfully tried it in my chai tea and english breakfast tea. Now I'm off to look for a glass container with a pouring spout to store it in for easier use.

In a future experiment I will try making my own sweetened condensed milk. I've actually been meaning to do that for years. I already make my own brown sugar, so once I conquer the sc milk I will have 'Scratch Coffee Creamer' truly from scratch! So cool!
Posted by Hillary at Home at 9:40 AM