Yes folks, I am making a Centsible revision!  In my classes I have shared my favorite dishwasher and laundry detergent recipes, but my hubby has stumbled across an ingredient that has blown the other two recipes away!  In order to post this, I needed to conduct a thorough experiment with an actual controlled test. I think you will be shocked and excited by what you see. In fact, I will go so far as to wager that this new recipe will far outdo any commercially made detergent on the market!  Read further to see why...

First, a brief history lesson.  There is an ingredient that used to be in most every detergent produced. It is still used as a cleaner, lawn fertilizer, and food additive. It's called Tri Sodium Phosphate (or TSP).  From what I gather, its alkaline character enables it to act as an saponifying agent that boosts your soap's cleaning power.  It was outlawed for home detergent use by the EPAs because there was a theory that the phosphates were contributing to algae blooms in some rivers and creeks in two counties in Washington. It wasn't ever completely proven, but the EPA has basically allowed everyone to continue to use it on the commercial level, but has banned it from the homemaking consumer (except in your cereal that your consuming. Hello? it's bad for rivers, but we can eat it anyway??)  Besides, they still haven't proven that the algae is even a problem in the first place!  And, my husband has another point to ponder. What about flouride? Many people intentionally put flouride in their drinking water supply, and it is derived from phosphate fertilizers!  Could there be a link there?  Ah, but I digress...back to TSP...

My hubby first found out about TSP while reading this article regarding one man's quest to bring back whiter whites and clearer glasses.  Inspired, my man gallantly drove to the hardware store and brought back this:

It was time for a test. First off, he decided to remix my dishwasher detergent. We had begun getting some hard water type film on my water glasses and measuring cups.  Since the recommend use is 1/2 tsp per Tablespoon (3 tsp)  of detergent, we knew that the ratio is 1:6, TSP:Detergent.  He mixed the dishwasher soap recipe as follows:

The result? While it was hard to measure the effect, let me just say the appearance after just one wash was marked. It's taken a few washings to fully get rid of the film, but my glasses look cleaner than they have in a long time-even before I started using homemade detergent!  And I have quit adding vinegar to the rinse-aid compartment altogether, not to mention that my dishwasher itself also looks spiffy and clean!

Now for the laundry soap:

I decided to do a more controlled experiment for this stage. Since I needed to make up more detergent anyway, it was a great time to give it a whirl. I gathered two white, 100% cotton, men's undershirts that were in like-new condition.  I laid them on my dining room table to be my specimens.  I mixed my laundry soap as stated in my original centsible handout. However, after mixing in the gallon of hot water to the soapy mixture, I extracted 2 Tbsp. for my control group.  Then I mixed in 1/3 cup of TSP to the rest of the hot solution (I figured the ratio as 1/3c TSP: 2.5c other soaps.) This will be my new test group.  While the detergent cooled and set, I went back to the shirts.

On each shirt I painted 1 Tbsp of Heinz orginal ketchup with a basting brush. 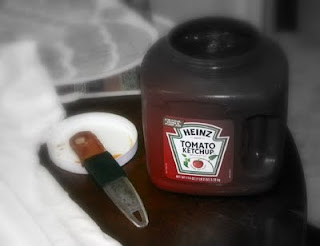 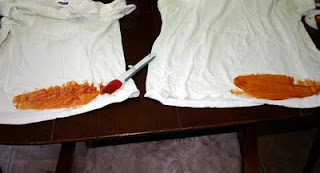 I let it set for 5 minutes and then took the first shirt to launder. This would be laundered with the old soap recipe. I put it on a small load setting, with warm water (since that's how I usually wash my lights/whites. Our glaciel water is truly COLD!), and on 'Heavy' setting for about a 20 minute cycle.  After it was finished, I set it aside and did the same with the TSP test shirt. Note, that the TSP shirt had actually sat for 20 minutes longer since I only have one washer. If the results were sketchy, I figured I would repeat the whole process in the reverse order. I think you'll see that is not necessary.  Here is the end result: 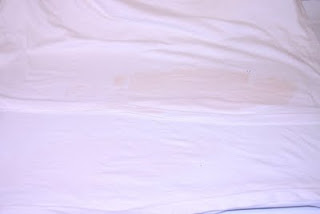 The shirt on top is the control/old recipe shirt. The one on bottom is the TSP test shirt.  To help the results show better, I did a saturation effect on the same photo: 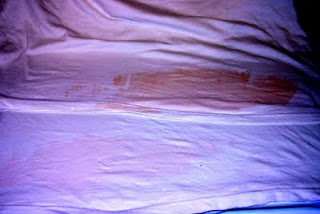 While the stain is still there in the TSP test shirt below, it is an obvious improvement over the control/old recipe shirt!  And that was without using any pre-treatment like Spray 'N Wash!  In addition, do not forget that the TSP shirt sat for 20 minutes longer.  Are you a believer now?! I sure am!  So for the record, here is my new laundry detergent recipe:

1 cup borax
1 cup washing soda
1/3 cup TSP
1/2 cup of grated bar soap
Melt the grated bar soap in 2 cups of water in a saucepan on the stove.  When melted, pour into a clean container and quickly stir in the borax, washing soda and TSP.  When thoroughly mixed, pour in 1 gallon of HOT water. Stir to combine and then let set. It will gel. In fact with the TSP, it gels even more firmly!

Now what about the Centsibility factor? While my husband paid almost $9 for our 4 lb carton, you can buy it by the individual pound as well. The average price seems to be $2-3/ lb on places like amazon.com.   As I mentioned before, it is pretty much available at any hardware or plumbing store, so shop around for your best deal.  One cup equals about 1 lb, so between re-mixing the dish soap and laundry soap, we have used 1 lb out of the 4 in the carton.  That means that it does add roughly $2 more to the dish soap and $1 more to the cost of the batch of laundry soap. Still this is much cheaper than pre-made laundry detergent!  If we add the $1 to the figures in the orignal centsible handout, we are looking at $2.25/70 loads which works out to .03/load!  You may be able to score the generic or super coupon detergent for that price, but since they are not allowed to put TSP in it, you will not have cleaning power of this recipe!  Remember also that people who are 'in the know' about TSP are buying pre-made cleaners at retail price and then adding in TSP as a booster! This way of doing it is MUCH more centsible than that!

Additionally, while I have been typing this, I re-washed both shirts in the new detergent with a spray n' wash pretreatment in warm water. Now the spot appears to be completely out of both shirts! Hooray!

**Keep in mind that I jokingly reference above that TSP is currently being used as a food additive/preservative-which it is! However, in the cleaning powder form, it is not edible and needs to be treated as a toxic cleaner.  Also, be sure to research if TSP affects being able to use this recipe with front-loading washers. Be reasonable and safe, and clean away... :)

Blessings to you and your sparkling homestead,
Hillary At Home
Posted by Hillary at Home at 7:00 AM