Homestead Experiment #24-Dehydrating To Save Space?


I was so excited when I found my dehydrator last fall at the local Salvation Army for $10 new in the box! It is a Nesco FD-61 with round, stacking trays. It came with four trays but a person can add up to 12 total.  Great!  Except a pack of 2 trays runs another $20-30.  $100 for 8 more trays?!  Not so great.  Thus, you can imagine my prepping exuberance when I found a similar dehydrator at a garage sale for $2 !  It doesn't have the temperature controls, so it's kind of a dumbed-down model of my first one, but I didn't care. It had trays! For $2, I got 4 more trays to add to my original one-plus, I now had a back-up dehydrator that I could use as needed or lend out to friends.  Thank you Lord!  Now I need to keep my eye out for the last 4 trays to reach my limit of 12...

After getting my first dehydrator I had played around with making 'banana gummies' (bananas don't really dry into chips without lots of chemical intervention, or so I've been told), and dried some herbs and bell peppers.  For our food storage I've mainly stuck with canning our own fruits and buying pre-canned from the store, but my pantry is getting a little crowded, and all those jars are crammed in quite snugly.  Now, I knew dehydrating is good for storing food that cannot be canned using conventional methods, but I began to wonder if it was worth dehydrating some food to increase my storage capability.  (This may seem like a no-brainer to many of you seasoned preppers, but remember, I'm still experimenting with these things.) Thus Experiment #23 was born: Could I take a small mountain of fruit and reduce it's storage size to 1/3 of its original size?

This was the fruit I decided to start with.  I mainly chose it because it was a good price when I swung through my local Costco store.  After buying this, I also added in three pineapples and 6 pints of raspberries, so just envision those in that space between the pears and oranges. I wish I would have taken a picture of those so that I could do a little photoshop job in there, but oh well. 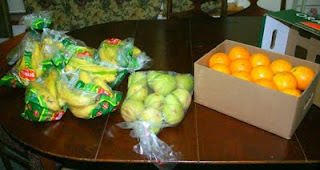 With all 8 trays going on the unit, it took me about a week to dry all of the fruit. However, due to our recent scare with a night-time fire at our home, I did not run the dehydrator at night while we were sleeping, or while we were gone.  (Note: The fire had nothing to do with small appliances, but I'm still scarred and do not wish to repeat it in any manner!)  Anyway, back to the fruit. It took a week to dry six bunches of bananas, 8lbs of oranges, 5lbs of pears, 6 pints of raspberries, and 3 pineapples.

When I finished the whole lot, this is what I ended up with: 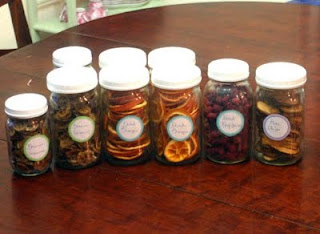 10 quart jars! That's all! Now I know you're counting this and saying "Wait, I only see 9."  Well, that's because I didn't realize my pineapple jar was already down in the pantry when I took the 'group shot'.  I had dried the pineapple first, and the finished product looks like this:
Ten quart jars takes up 2 rows lined up front-to-back on my pantry shelf.  It spans approximately 8" across the width of my shelf. The boxes from the oranges alone measures 10" on it's short end!  The bananas, pears, pineapples, oranges, and raspberries would have taken up the entire 36" shelf in my pantry cupboard if I had placed them in there whole. These jars take up less than a quarter of that space! Wow! I surpassed my goal of 1/3 by a long margin!

In spite of this newfound success, I am not going to scrap storing canned fruit.  Eating a reconstituted orange chip is not the same experience as eating a canned mandarin orange. However, these dried goods will be nice for cooking and making jam with should I ever need to tap into my long-term storage , and the dried raspberries and oranges taste kind of like a natural candy.  Yum!  I will keep canning fruit, meat, beans, and potatoes as storage space allows, but I will definitely make a point to add in a large complement of dried produce as well. Heck, a future experiment may include making various kinds of jerky!

So dust off your dehydrator and have fun with all the yummy produce in season right now. Oh-and do you like those cute little labels I am using on my jars? I found those at tipnut.com for free!  Check out their wide assortment of collected templates to embellish your pantry's goodies!

Blessings to you and your homestead,
Hillary At Home
Posted by Hillary at Home at 7:00 AM