So, on a mesage board, I posted the following question:

"I proudly marched into the home office and showed my hubby the latest thrift store trophy-a practically new in box meat grinder with all the different plates and doohickeys. "Look what I found at St. Vinny's!" I crow. My husband just looks at me with raised eyebrows and replies "Nice sweety. So, um, are you planning to raise cattle or go hunting anytime soon?" Considering we live in a duplex in Juneau, Alaska (no moose or caribou here), neither one of those scenarios is very likely. Suddenly I had no practical use for this. "I don't know" I hastily respond, "it just seems like all the food prep and farm sites I go on have them, so it just seemed like something we should have...I guess I'll just start a farm hope-chest or something..."

We laugh and go on our way. The grinder now rests on a shelf next to my pressure cooker. Aside from one blogger using it to shred mass amounts of homemade cheese, I'm wondering if anyone else has creative uses for a hand-crank meat grinder?"

I got a lot of answers-from playdough (umm, no!) to salsa to jam to ground beef. The one I really latched onto, though was sausage! Ground pork sausage to be exact. I use a lot of it in my cooking (marinara, pizza, breaksfast stuff, casseroles, etc), and unless I can find it on sale, it's $3/lb at costco. Also, I would love to make it leaner as well. Thus the idea for our next experiment was decided upon.

I got a 10lb pork shoulder for 98 cents/lb. Up here that's pretty darn good. I cut the bone and fat cap off and was left with about 7lbs of meat. We ground it once through my grinder. Well, let me back up. The kids all wanted a turn, but after a few cranks we encountered our many hindrances. First off, the grinder kept 'wobbling' off the counter. I got a piece of shelf-liner and wrapped the edge with that. Problem 1 solved! Then came the fatty parts binding up the blade. What we decided is that even though the box proclaims 'self sharpening blade', ours had been sitting for who-knows-how-long on a shelf and could probably use a hit or two from a file. After my hubby did that, it worked like a charm. 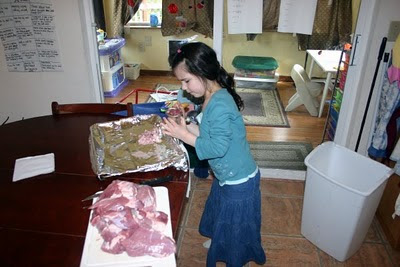 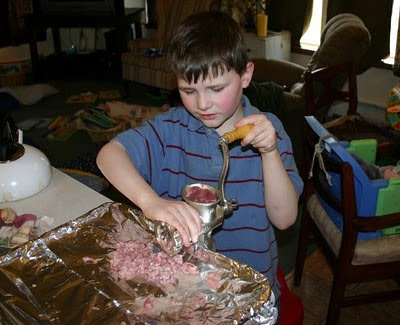 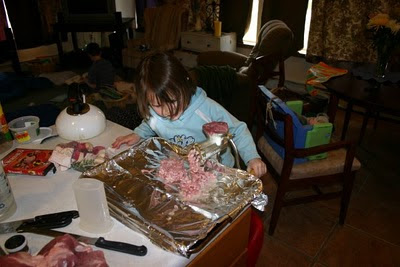 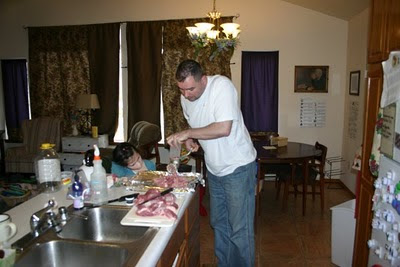 (Even hubby had to get in on the action!)

Next I added in the spices. I just followed a basic recipe off this website:
http://schmidling.com/bsaus.htm
It seemed straightfoward enough. I just made 6x the quantity.

Now came the next hurdle. After I mixed in the spices, we went to run it back through the grinder. Well, by now the meat is pretty much a 'mush' consistency, and so the spindle inside didn't really have anything to grab onto to pull the meat in. So, we needed something to push the meat down. Well, because of the throat being short and oval shaped, there wasn't much we could use. We finally found that if I used the pusher thingy from my food processor at an angle, it worked okay. My hubby thinks he can rig up a funnel pusher to extend the throat and allow us to feed in more meat at a time. 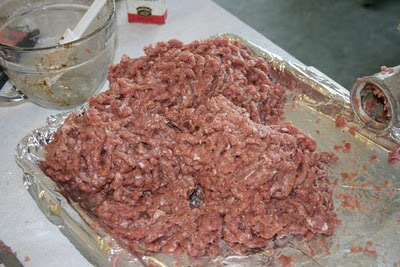 (Doesn't look all that appealing does it?)

Overall this was a success. BUT considering it took us almost 2 hours to grind 10lbs, I'm not in a hurry to do it again anytime soon. If we can figure out a better idea for the second grind, then I may warm back up to the idea. The product outcome, though, was great! For a little over $1, I had lean, yummy sausage. We had one 1lb in my marinara last night over cheese raviolis and it was yum-my!!
Posted by Hillary at Home at 10:33 PM