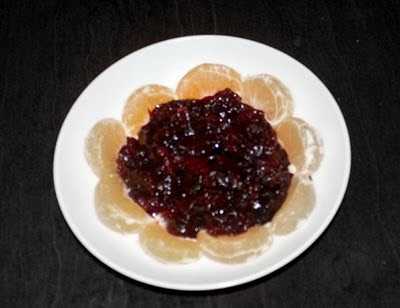 Really, you can make this? I thought a cranberry bog was the little can that the jelly is sold in! :S

No, not really, but I never really thought of making the sauce on my own. I've made variations of it by combining the canned sauce with jell-o, canned fruit, sour cream, and even mayonnaise, but to make the actual sauce is a new concept to me. To be honest with you, I don't really care much for cranberry sauce unless it has all those mix-ins, but my husband and children adore it. So each holiday season I will lovingly open the can and dump the glob on a plate and slice it, or (time permitting) concoct some great mixture to disguise the flavor so I may partake as well. It's all about compromise you know...

Well, the other day when I was looking for the tomato seed video on the Homestead-Acres youtube channel, I saw one on the sidebar for "How To Make Cranberry Sauce and Can It." After watching the tutorial, I was ready to take on my next experiment! Thankfully I had a large amount of cranberries in the fridge already (for making pumpkin bread and stringing for the Christmas tree), so I didn't have to forego my other experiment to try this one. Yay!

Since we are a homeschooling family who LOVES to read, I couldn't resist pairing this experiment with one of our two favorite Thanksgiving books, "Cranberry Thanksgiving" by Harry and Wendy Devlin. (The other one is called "Turk And Runt: A Thanksgiving Comedy" by Lisa Wheeler. Super cute!) After reading the book, we donned our aprons and got to work! According to the video, for each batch of sauce you need 1 bag (3 cups cranberries), 1 cup sugar, and 1 cup water. Sounds straightforward enough. I had my son rinse and pick through the berries in a colander, and then dump them into the dutch oven. 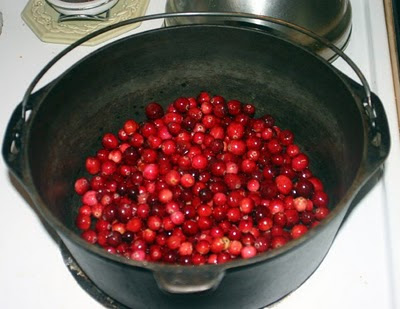 This was also a good opportunity to introduce proper measuring techniques for my older two. I've always just measured the ingredients and handed it over for them to 'dump'. But I realized that, at 7 years old, they probably will have to learn how to scoop and level some day! I purposefully used a 1/4c for the sugar so that they each had two turns at scooping and levelling with the straight edge of the butter knife. As to the liquid ingredients, I realized a helpful tidbit yesterday. My mother had gotten me a set of liquid cups that you could read from the side (traditional) or by looking down on the inside (Oxo Good Grips Measuring Cups or Pampered Chef Easy Read Measuring Cups). These are great for kids! It was really easy for them to see their measurement by looking down in it after I filled it. Also, it was more dramatic for me to be able to show them the variation in water level by how you tilt your hand (remember to alway set your cup on the counter to double check your measurement before pouring!).

Anyway, back to the sauce. We added all our ingredients in the pot and stirred. It came to a boil, we reduced heat and stirred. We let it boil for ten minutes, and the pot kept being stirred. According to the video we didn't need to constantly stir, but my kids were determined to be active chefs and would not let the spoon rest. 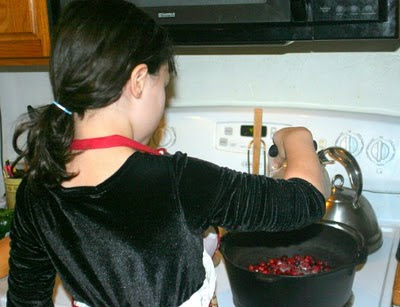 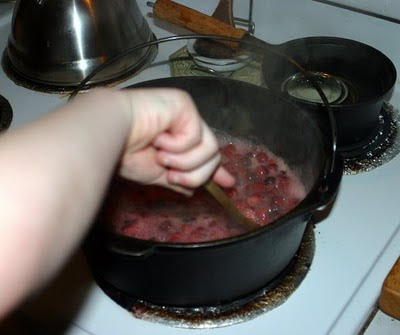 My son's chubby little arm and fingers. Aren't they sweet?


After 10 minutes, I glopped the goop into a jar and put it in the fridge to cool for dinner. I wasn't sure what the yield would be since the video was a little unclear. She had made a triple batch and put "some" in the fridge and only canned 2 quarts. Since she didn't say how much she put in the fridge it was hard to gauge what the total would be for 1 batch. I got just under a pint which my 4 cranberry fans devoured in one sitting. If I'm going to have enough for Thanksgiving company, I will have to make a double batch, at least!

How did it taste? I was pleasantly surprised. While this won't make a cranberry convert out of me, I do prefer the taste and texture much more than the store bought version (a 'lesser of two evils' kinda thing), but my family raved about it! They cleaned their bowls and then carried me around on their shoulders shouting and cheering. Well, maybe not really, but they did say it was much better than the other kind. Given the simplicity, price, and smiling faces, I count this experiment a huge success!
Posted by Hillary at Home at 10:36 AM