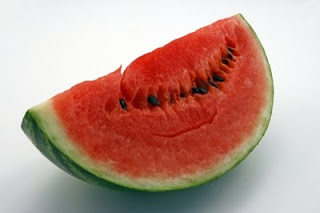 Here's a tasty tidbit for you. Do you know how to pick a good watermelon?  Well, I got it from my sister-in-law who got it from  a watermelon farmer that the trick is to look for the big yellow spot. The bigger and yellow-er the better.  That means that the melon has sat on the vine to ripen a good long time. She passed that trick along to me a few years ago, and I've never picked a blah melon since!  But I just can't leave well enough alone. I just have to take that juicy melon and do an experiment with it!

I remember reading about watermelon pickles in pioneer-themed books and have seen them referred to in southern magazines, but didn't think about trying to make them myself until I ran across the recipe in one of my homesteading books. I couldn't resist. I HAD to try to make them!  It would be a great project for the whole family to get in on, and if they were good, they could be the ideal pickling recipe since I don't seem to have too many cucumbers growing on my vines...yet... So, where to start?

I got a medium sized watermelon.  I painstakingly cut all the pink meat off the rind and cut the green peel off the outside. All I had left were strips of the white "Don't-eat-that-it-will-give-you-a-stomach ache" rind.  Yep, that's right. You're pickling the taboo part of the melon slice that is normally the stopping point when you're chowing down.  How cool, and yet how odd, to think that someone actually thought of pickling that...

Cut the rind into 1" squares. I mistakenly thought that if the hard green peel was cut off, it would be easy for my kids to cut the rind with safety or butter knives. Unfortunately that was not the case. We soon had to break out the steak knives for the older two and my younger just kept sawing away with her butter knife.

Cover with cold water and simmer until fork tender (about 10 minutes).  Drain and set aside.  In another pot combine sugar, vinegar, and 1 1/2 c water.  Put cloves and cinn. sticks in a spice bag and place in pot. Boil and stir for 5 minutes. Pour over rind. Add lemon slices and marinate overnight.

The Result:  Well, hmmm. It wasn't as family friendly of a cooking process as I had hoped. The rind was tougher and it took awhile to cut, but overall it was a fairly simple project to do.  As to the taste, if you like sweet and sour pickles you should like this recipe. The rind has a nice firm texture like a cuke and it pickled well. My kids all liked them a lot. However I don't care for that flavor of pickle as much, so I just tolerate these. My husband actually detests sweet and sour pickles, so naturally he spit this one out in the grass. LOL  Well, I guess that I will start working on a dill version for an experiment next summer!

I hope you have gotten to enjoy some watermelon in one form or another this summer! I think I will just stick to triangle wedges with pink juice dripping down my chin!  :-)

Blessings,
Hillary At Home
Posted by Hillary at Home at 7:00 AM