I have had several packages of chicken breasts and thighs hogging space in my freezer until I could get a chance to try canning them.  With the holidays approaching I decided that now would be a good time to free up freezer space for turkeys and hams-as well as to get ready for the HUGE chicken sale that is sure to follow Christmas. Did you see my post about that last year?  If not, be sure to check it out. It is worth noting so that you can observe whether this will be the case in your own area.

Okay, back to the canning. I read several recipes like this one, and watched a multitude of youtube videos like this one and this one to learn how.  It seemed pretty straightforward enough-especially since I've already canned salmon and hamburger. However, what I didn't like was the idea of putting a set amount of salt and bouillon into each jar regardless of how much liquid you did/did not end up adding. Because of air pockets in between the pieces of meat, you could end up adding varying amounts, and I was afraid that a full cube of bouillon (which is supposed to accompany a cup of water) would be too concentrated. Yes, I know that the chicken would release it's own juices as well, but I wanted to be a little more precise (okay, controlling) about the endeavor.  So, here is what I did:

I gathered my chicken, cutting utensils, clean jars, bouillon powder, measuring cup and spoons, and set to work cutting my chicken into strips to pack into jars. I liked the idea of having it in strips to go over pasta or in salads. I can always chunk it smaller or shred it later. 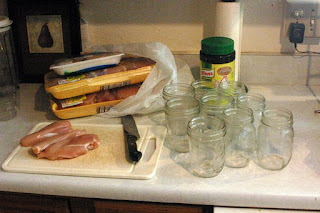 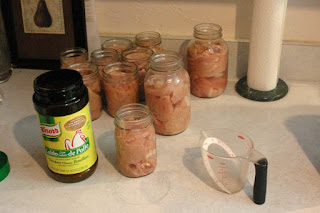 Next, I started with one cup of water in my measuring cup. I poured as much in as I could to allow a 3/4" headspace. Then I used my trusty wooden chopstick to work out any air bubbles so I could make sure that as much of the airspace was filled with meat or liquid as possible. (Now some of the resources I checked said to add broth or water, and some said not to. Since my experience with canning fish is that it does make its own liquid, I do not know that I would mess with it in the future. I wanted to do it this round mainly because I wanted to know how much seasoning to add in general.) 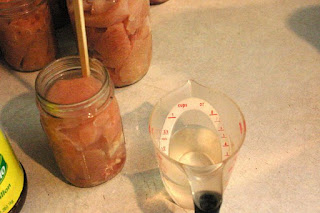 As you can see from this cup, I only added about 1/3c. of my water which means that 1 full bouillon cube or 1 tsp. of salt would make for a pretty salty jar of chicken.  By doing it this way, I only added about 1/2 tsp. of the powdered bouillon (adding a bit more than 1/3 to account for the chicken juices).  So, now in the future I know that even without any liquid at all, I will still only add about 1/2 tsp of seasonings to make a broth with the juices.

After this step, I wiped the rims, applied my sterilized lids and rings, and pressure canned the sealed jars at 10 lbs for 90 minutes (while finishing up a knitting project as I waited :).  After it was all done, I expected it to look like pretty strips floating in yellow-y chicken broth. What I got was this: 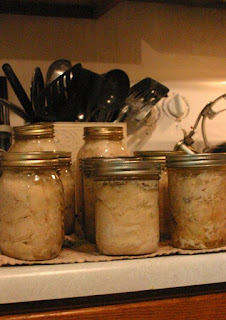 I got jars of white meat floating in greasy looking broth-much like the canned halibut a friend gave me. I guess I better be sure to label these to avoid any mix-ups!  So, while it isn't as visually appealing as I had hoped, it has been so nice to have these on hand. I have added it to fettucine before topping with alfredo, as well as adding it into fried rice for added protein.  How handy to know I have it ready for soups, salad topping, enchiladas, or for making chicken salad sandwiches. Yum!

What kind of meat or other items have you canned on your homestead? Any tips to share?

PS-Do not forget about that sale the week after Christmas. You can get lots of inexpensive 'specimens' to experiment with in your canner!
Posted by Hillary at Home at 8:08 AM