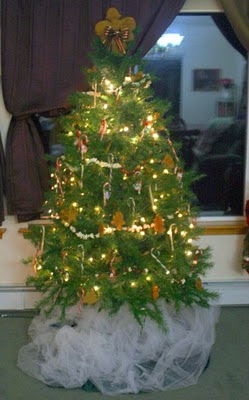 In our search for simplicity, I had the idea of keeping our traditional ornaments packed away in boxes this year, in lieu of an edible Christmas tree! (Actually the tree is still the 14 yr old artificial I bought at Woolworth's when they were closing down their store in Key West.) The edible part comes in the decor. What if we had a fun rule that everything besides the tree and lights had to be edible-including the topper?! I thought it would be a fun experiment to try. It was just going to take a little marketing to the kids. Hmmm....

So, there we were in the candy aisle at Fred Meyer. My kids were ogling the variety of candy canes available. "Now's my chance!" I thought. I sprang the idea on them, then and there. Negotiations were tense at times.
"Yes, you can hang all the disney ornaments in your bedroom instead."
"No, you can't eat off of the tree all month long."
"Yes, you will still get to decorate it."
Finally, we took a vote (much to the amusement of fellow shoppers) and it was game on. I let them each pick out a box of candy canes to contribute, and ideas of other ornaments were being shouted out. Popcorn! Cookies! Lifesaver chains! Hooray-let the tree trimming begin!

Back at home a few days later, we decided to go with plain gingerbread cookies for the big ornaments along with popcorn and cranberry garland and the candy canes. The only real debate we had was when it came to the topper. Angel or Star? Angel finally won out because I told them I was planning to afix it with a ribbon and it would look better on the angel. As you can see by the photos, it actually went pretty well. Some may think it looks hokey, but I prefer to call it more 'rustic' if you don't mind. 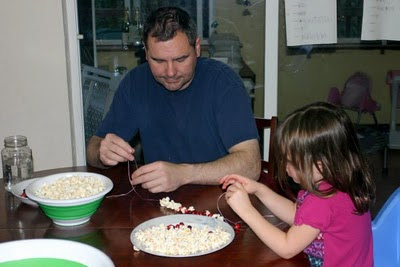 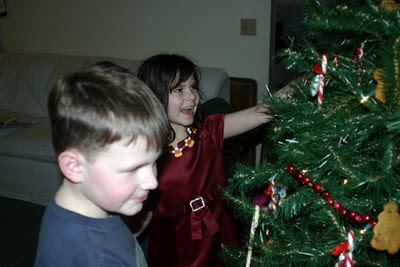 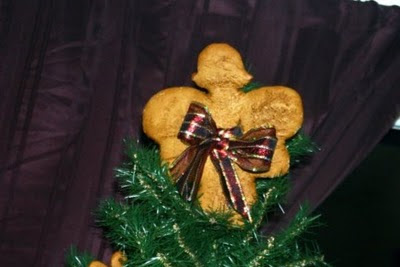 Here are some helpful hints we learned along the way:

-Don't roll cookies too thick. It is better to have them thin and hard than thicker and soft. During the next day and evening, we had quite a few that had broken off the hook and ended up in the cookie jar rather than on the tree.

-You may have to reinforce your tree topper on the back. I used some popsicle sticks hot glued crosswise. Yes, this did make the angel in-edible, but I really didn't want to deal with the emotional fallout if our angel was discovered in pieces under the tree.

-Be sure to measure your lengths of string for the garlands. Give the shorter pieces (the ones that will go around the top of the tree) to the younger children who have less patience. My hubby was actually late in joining our stringing, but it worked out well. Rather than have him do another string, I just had him join on the other end of the kids' strings. They thought it was funny to watch their garland grow from both ends, and it kept the whining to a minimum.

So, if you are looking for an inexpensive way to change-up your Christmas decor without breaking your budget, think about this fun idea. It may be a little late for this year, but just file it away for future Christmas ideas. If it's not too late, then you better get to decorating; Christmas is a week away! (gulp!)